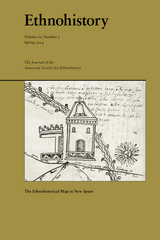 BUY
The Ethnohistorical Map in New Spain, Volume 61
by Alex Hidalgo and John Lopez
Duke University Press
Paper: 978-0-8223-6806-9
This special issue brings together a multidisciplinary group of scholars to examine the relationship between cartography and the expression of ethnicity in the Viceroyalty of New Spain from 1521 to 1821. Maps from Oaxaca, central Mexico, and the Philippines, spanning the sixteenth through the early nineteenth centuries, provide important yet understudied illustrations of the social, political, and geographic complexity of the regions. This collection of essays scrutinizes maps made by cosmographers, surveyors, indigenous painters, and scientists. The contributors explicate how ethnicity can inform discussions of colonialism, social memory, land tenure, visual representation, and science and technology, ultimately demonstrating how New Spain’s culture and society were forged during the early modern period.

Essays featured in this issue analyze the use of cartography to communicate the urban form of early colonial Mexico City and the application of botanical and protochemical knowledge to make ink for native maps from Oaxaca. Other essays address the representation of ethnicity and space in seventeenth-century Manila, the construction of spatial boundaries through the use of word and image in central Mexico, and the survival of Nahua place names and social ordering in eighteenth-century Mexico City.

Alexander Hidalgo is Assistant Professor of Latin American History at Texas Christian University. John F. López is a Provost’s Postdoctoral Scholar at the University of Chicago.