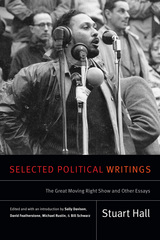 Selected Political Writings gathers Stuart Hall's best-known and most important essays that directly engage with political issues. Written between 1957 and 2011 and appearing in publications such as New Left Review and Marxism Today, these twenty essays span the whole of Hall's career, from his early involvement with the New Left, to his critique of Thatcherism, to his later focus on neoliberalism. Whether addressing economic decline and class struggle, the Cuban Missile Crisis, or the politics of empire, Hall's singular commentary and theorizations make this volume essential for anyone interested in the politics of the last sixty years.
AUTHOR BIOGRAPHY
Stuart Hall (1932–2014) was one of the most prominent and influential scholars and public intellectuals of his generation. Hall appeared widely on British media, taught at the University of Birmingham and the Open University, was the founding editor of New Left Review, and served as the director of Birmingham’s Centre for Contemporary Cultural Studies. He is the author of Familiar Stranger: A Life between Two Islands and Cultural Studies 1983: A Theoretical History, both also published by Duke University Press.
Sally Davison is the managing editor at Lawrence & Wishart and the editor of Soundings.

David Featherstone is Senior Lecturer of Geographical and Earth Sciences at the University of Glasgow.

Michael Rustin is Professor of Sociology at the University of East London.