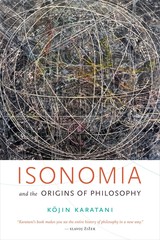 In Isonomia and the Origins of Philosophy—published originally in Japanese and now available in four languages—Kōjin Karatani questions the idealization of ancient Athens as the source of philosophy and democracy by placing the origins instead in Ionia, a set of Greek colonies located in present-day Turkey. Contrasting Athenian democracy with Ionian isonomia—a system based on non-rule and a lack of social divisions whereby equality is realized through the freedom to immigrate—Karatani shows how early Greek thinkers from Heraclitus to Pythagoras were inseparably linked to the isonomia of their Ionian origins, not democracy. He finds in isonomia a model for how an egalitarian society not driven by class antagonism might be put into practice, and resituates Socrates's work and that of his intellectual heirs as the last philosophical attempts to practice isonomia's utopic potentials. Karatani subtly interrogates the democratic commitments of Western philosophy from within and argues that the key to transcending their contradictions lies not in Athenian democracy, with its echoes of imperialism, slavery, and exclusion, but in the openness of isonomia.
AUTHOR BIOGRAPHY
Kōjin Karatani is an internationally renowned theorist and philosopher. Previously, he was a professor at Hosei University in Tokyo, Kinki University in Osaka, and Columbia University. He is the author of numerous books, including The Structure of World History: From Modes of Production to Modes of Exchange and Origins of Modern Japanese Literature, both also published by Duke University Press.
REVIEWS
-- J. A. Fischel Choice