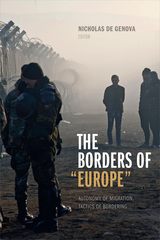 In recent years the borders of Europe have been perceived as being besieged by a staggering refugee and migration crisis. The contributors to The Borders of "Europe" see this crisis less as an incursion into Europe by external conflicts than as the result of migrants exercising their freedom of movement. Addressing the new technologies and technical forms European states use to curb, control, and constrain what contributors to the volume call the autonomy of migration, this book shows how the continent's amorphous borders present a premier site for the enactment and disputation of the very idea of Europe. They also outline how from Istanbul to London, Sweden to Mali, and Tunisia to Latvia, migrants are finding ways to subvert visa policies and asylum procedures while negotiating increasingly militarized and surveilled borders. Situating the migration crisis within a global frame and attending to migrant and refugee supporters as well as those who stoke nativist fears, this timely volume demonstrates how the enforcement of Europe’s borders is an important element of the worldwide regulation of human mobility.


Acknowledgments  vii
Introduction. The Borders of "Europe" and the European Question / Nicholas De Genova  1
1. "The Secret Is to Look Good on Paper": Appropriating Mobility within and against a Machine of Illegalization / Stephan Scheel  37
2. Rescued and Caught: On the Humanitarian-Security Nexus at Europe's Frontiers / Ruben Andersson  64
3. Liquid Traces: Investigating Deaths of Migrants at the EU's Maritime Frontier / Charles Heller and Lorenzo Pezzani  95
4. The Mediterranean Question: Europe and Its Predicament in the Southern Perpheries / Laia Soto Bermant  120
5. Europe Confronted by Its Expelled Migrants: The Politics of Expelled Migrants' Associations in Africa / Clara Lecadet  141
6. Choucha beyond the Camp: Challenging the Border of Migration Studies / Glenda Garelli and Martina Tazzioli  165
7. "Europe" from "Here": Syrian Migrants/Refugees in Istanbul and Imagined Migrations into and within "Europe" / Souad Osseiran  185
8. Excessive Migration, Excessive Governance: Border Entanglements in Greek EU-rope / Maurice Stierl  210
9. Dubliners: Unthinking Displacement, Illegality and Refugeeness within Europe's Geographies of Asylum / Fiorenza Picozza  233
10. The "Gran Ghettò: Migrant Labor and Militant Research in Southern Italy / Evelina Gambino  255
11. "We Want to Hear from You": Reporting as Bordering in the Political Space of Europe / Dace Dzenovska  283
References  299
Contributors  341
Index  345

This volume's contributors examine the perceptions of the staggering refuge and migration crisis in Europe, demonstrating how it stems from migrants exercising their right to the freedom of movement, leads states to create new technologies of regulating human movement, and prompts the questioning of the very idea of Europe.