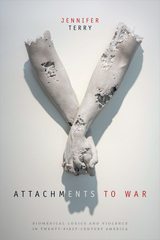 In Attachments to War Jennifer Terry traces how biomedical logics entangle Americans in a perpetual state of war. Focusing on the Afghanistan and Iraq wars between 2002 and 2014, Terry identifies the presence of a biomedicine-war nexus in which new forms of wounding provoke the continual development of complex treatment, rehabilitation, and prosthetic technologies. At the same time, the U.S. military rationalizes violence and military occupation as necessary conditions for advancing medical knowledge and saving lives. Terry examines the treatment of war-generated polytrauma, postinjury bionic prosthetics design, and the development of defenses against infectious pathogens, showing how the interdependence between war and biomedicine is interwoven with neoliberal ideals of freedom, democracy, and prosperity. She also outlines the ways in which military-sponsored biomedicine relies on racialized logics that devalue the lives of Afghan and Iraqi citizens and U.S. veterans of color. Uncovering the mechanisms that attach all Americans to war and highlighting their embeddedness and institutionalization in everyday life via the government, media, biotechnology, finance, and higher education, Terry helps lay the foundation for a more meaningful opposition to war.
AUTHOR BIOGRAPHY
Jennifer Terry is Professor of Gender and Sexuality Studies at the University of California, Irvine, the author of An American Obsession: Science, Medicine, and Homosexuality in Modern Society, and coeditor of Processed Lives: Gender and Technology in Everyday Life and Deviant Bodies: Critical Perspectives on Difference in Science and Popular Culture.
REVIEWS
-- Kenneth MacLeish Medical Anthropology Quarterly