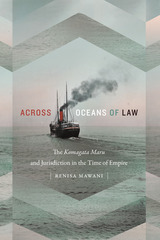 In 1914 the British-built and Japanese-owned steamship Komagata Maru left Hong Kong for Vancouver carrying 376 Punjabi migrants. Chartered by railway contractor and purported rubber planter Gurdit Singh, the ship and its passengers were denied entry into Canada and two months later were deported to Calcutta. In Across Oceans of Law Renisa Mawani retells this well-known story of the Komagata Maru. Drawing on "oceans as method"—a mode of thinking and writing that repositions land and sea—Mawani examines the historical and conceptual stakes of situating histories of Indian migration within maritime worlds. Through close readings of the ship, the manifest, the trial, and the anticolonial writings of Singh and others, Mawani argues that the Komagata Maru's landing raised urgent questions regarding the jurisdictional tensions between the common law and admiralty law, and, ultimately, the legal status of the sea. By following the movements of a single ship and bringing oceans into sharper view, Mawani traces British imperial power through racial, temporal, and legal contests and offers a novel method of writing colonial legal history.
AUTHOR BIOGRAPHY
Renisa Mawani is Professor of Sociology at the University of British Columbia and author of Colonial Proximities: Crossracial Encounters and Juridical Truths in British Columbia, 1871–1921.
REVIEWS
-- P. D. Thomas Choice