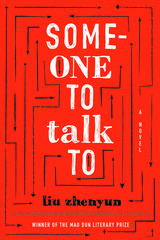 Tofu peddler Yang Baishun is a man of few words and few friends. Unable to find meaningful companionship, he settles for a marriage of convenience. When his wife leaves him for another man he is left to care for his five-year-old stepdaughter Qiaoling, who is subsequently kidnapped, never to be seen by Yang again. Seventy years later we find Niu Aiguo, who, like Yang, struggles to connect with other people. As Niu begins learning about his recently deceased mother’s murky past it becomes clear that Qiaoling is the mysterious bond that links Yang and Niu. Originally published in China in 2009 and appearing in English for the first time, Liu Zhenyun’s award-winning Someone to Talk To highlights the contours of everyday life in pre- and post-Mao China, where regular people struggle to make a living and establish homes and families. Meditating on connection and loneliness, community and family, Someone to Talk To traces the unexpected and far-reaching ramifications of seemingly inconsequential actions, while reminding us all of the importance of communication.
AUTHOR BIOGRAPHY
Liu Zhenyun is the author of over a dozen novels, including I Did Not Kill My Husband and The Cook, the Crook, and the Real Estate Tycoon.

Howard Goldblatt is a translator of dozens of works of Chinese literature, including those of Nobel Prize winner Mo Yan.