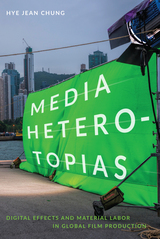 In Media Heterotopias Hye Jean Chung challenges the widespread tendency among audiences and critics to disregard the material conditions of digital film production. Drawing on interviews with directors, producers, special effects supervisors, and other film industry workers, Chung traces how the rhetorical and visual emphasis on seamlessness masks the social, political, and economic realities of global filmmaking and digital labor. In films such as Avatar (2009), Interstellar (2014), and The Host (2006)—which combine live action footage with CGI to create new hybrid environments—filmmaking techniques and "seamless" digital effects allow the globally dispersed labor involved to go unnoticed by audiences. Chung adapts Foucault's notion of heterotopic spaces to foreground this labor and to theorize cinematic space as a textured, multilayered assemblage in which filmmaking occurs in transnational collaborations that depend upon the global movement of bodies, resources, images, and commodities. Acknowledging cinema's increasingly digitized and globalized workflow, Chung reconnects digitally constructed and composited imagery with the reality of production spaces and laboring bodies to highlight the political, social, ethical, and aesthetic stakes in recognizing the materiality of collaborative filmmaking.
AUTHOR BIOGRAPHY
Hye Jean Chung is Assistant Professor in the School of Global Communication at Kyung Hee University.
REVIEWS
-- Amy R. Wong ASAP/Journal