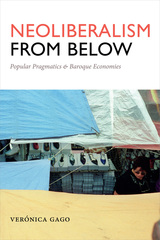 In Neoliberalism from Below—first published in Argentina in 2014—Verónica Gago examines how Latin American neoliberalism is propelled not just from above by international finance, corporations, and government, but also by the activities of migrant workers, vendors, sweatshop workers, and other marginalized groups. Using the massive illegal market La Salada in Buenos Aires as a point of departure, Gago shows how alternative economic practices, such as the sale of counterfeit goods produced in illegal textile factories, resist neoliberalism while simultaneously succumbing to its models of exploitative labor and production. Gago demonstrates how La Salada's economic dynamics mirror those found throughout urban Latin America. In so doing, she provides a new theory of neoliberalism and a nuanced view of the tense mix of calculation and freedom, obedience and resistance, individualism and community, and legality and illegality that fuels the increasingly powerful popular economies of the global South's large cities.
AUTHOR BIOGRAPHY
Verónica Gago is Professor of Social Sciences at the University of Buenos Aires, Professor at the Instituto de Altos Estudios, Universidad Nacional de San Martín, and Assistant Researcher at the National Council of Research (CONICET). Her work is deeply influenced by active participation in the experience of Colectivo Situaciones.
REVIEWS
“Verónica Gago’s Neoliberalism from Below represents an important milestone in this biopolitical turn in the study of neoliberalism. . . . In fact, Neoliberalism from Below has already in Latin America become a kind of field manual for the type of militant research of which Gago is herself an important purveyor.”

"A tour de force through more than a century of economic and political thought . . . It should be on the reading list of any scholar working with themes of informality, neoliberalism, or developmentalism."

"Brings a much-needed perspective from the Global South to theoretical debates concerning neoliberalism. . . . Neoliberalism from Below masterfully achieves the task it set out to do--namely to characterize neoliberalism . . . A necessary addition to the literature."

"Gago presents her audience with a provocative argument that examines the contradictions of neoliberal capitalism, particularly how it uses, but is also used by, precarious labor. . . . A significant contribution that sits with neoliberalism’s paradoxical manifestations. It is critical reading for those interested in theorizing the shifting dynamics of late capitalism."

"A fascinating and original account of the production of neoliberalism from the perspective of popular economic practices in Argentina. . . . This skillful translation into English by Liz Mason-Deese . . . is a major theoretical contribution that sheds light on other rationalities which are permeating neoliberalism in Latin America."

"An enthralling read. . . . Such is the richness of the work that attempting to review it was a daunting, and at times seemingly thankless, task – should one focus on its contributions to (Southern) urban geography? Attempt to unpack the discussion of governmentality and populism? Or trace its refreshingly nuanced take on ‘slave labour’? . . . Gago is a voice that must be listened to. . . . Alongside the other books in Duke’s Radical Américas series, Gago has made an invaluable contribution that reiterates once more that Latin American thinking is among the most exciting in the world."

"Anthropologists of work will find the book significant for its discussion of migrants, blurring the classical definitions of work, as they mix wage labor with entrepreneurial projects or self-employment in ways that problematize the division between formal and informal work. . . . [Gago] effectively considers the ways in which configurations of work are generative for how urban space develops—a contribution that will extend beyond the book’s focus on Argentina."


Acknowledgments  vii
Introduction. Neoliberalism from Below: A Perspective from Latin America  1
1. Between the Proletarian Microeconomy and the Transnational Network: La Salada  29
2. Between La Salada and the Workshop: Communitarian Wealth in Dispute  78
3. Between Servitude and the New Popular Entrepreneurship: The Clandestine Textile Workshop  108
4. Between the Workshop and the Villa: A Discussion about Neoliberalism  153
5. Between Postnational Citizenship and the Ghetto: The Motley City  178
6. Between Populism and the Politics of the Governed: Governmentality and Autonomy  218
Conclusion. Neoliberal Reason  234
Notes  237
References  257
Index  271