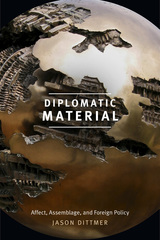 In Diplomatic Material Jason Dittmer offers a counterintuitive reading of foreign policy by tracing the ways that complex interactions between people and things shape the decisions and actions of diplomats and policymakers. Bringing new materialism to bear on international relations, Dittmer focuses not on what the state does in the world but on how the world operates within the state through the circulation of humans and nonhuman objects. From examining how paper storage needs impacted the design of the British Foreign Office Building to discussing the 1953 NATO decision to adopt the .30 caliber bullet as the standard rifle ammunition, Dittmer highlights the contingency of human agency within international relations. In Dittmer's model, which eschews stasis, structural forces, and historical trends in favor of dynamism and becoming, the international community is less a coming-together of states than it is a convergence of media, things, people, and practices. In this way, Dittmer locates power in the unfolding of processes on the micro level, thereby reconceptualizing our understandings of diplomacy and international relations.
AUTHOR BIOGRAPHY
Jason Dittmer is Professor of Political Geography at University College London and the author of Captain America and the Nationalist Superhero: Metaphors, Narratives, and Geopolitics and coeditor of Diplomatic Cultures and International Politics: Translations, Spaces, and Alternatives.
REVIEWS
-- Ed Bryan Geopolitics


-- John A. Gentry Perspectives on Politics