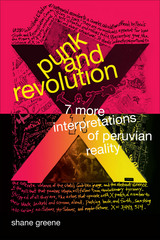 In Punk and Revolution Shane Greene radically uproots punk from its iconic place in First World urban culture, Anglo popular music, and the Euro-American avant-garde, situating it instead as a crucial element in Peru's culture of subversive militancy and political violence. Inspired by José Carlos Mariátegui's Seven Interpretive Essays on Peruvian Reality, Greene explores punk's political aspirations and subcultural possibilities while complicating the dominant narratives of the war between the Shining Path and the Peruvian state. In these seven essays, Greene experiments with style and content, bends the ethnographic genre, and juxtaposes the textual and visual. He theorizes punk in Lima as a mode of aesthetic and material underproduction, rants at canonical cultural studies for its failure to acknowledge punk's potential for generating revolutionary politics, and uncovers the intersections of gender, ethnicity, class, and authenticity in the Lima punk scene. Following the theoretical interventions of Debord, Benjamin, and Bakhtin, Greene fundamentally redefines how we might think about the creative contours of punk subculture and the politics of anarchist praxis.
AUTHOR BIOGRAPHY
Shane Greene is Associate Professor of Anthropology at Indiana University and the author of Customizing Indigeneity: Paths to a Visionary Politics in Peru.
REVIEWS
-- Paulo Drinot The Americas