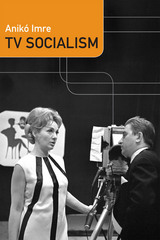 In TV Socialism, Anikó Imre provides an innovative history of television in socialist Europe during and after the Cold War. Rather than uniform propaganda programming, Imre finds rich evidence of hybrid aesthetic and economic practices, including frequent exchanges within the region and with Western media, a steady production of varied genre entertainment, elements of European public service broadcasting, and transcultural, multi-lingual reception practices. These televisual practices challenge conventional understandings of culture under socialism, divisions between East and West, and the divide between socialism and postsocialism. Taking a broad regional perspective encompassing Eastern Europe and the Soviet Union, Imre foregrounds continuities between socialist television and the region’s shared imperial histories, including the programming trends, distribution patterns, and reception practices that extended into postsocialism. Television, she argues, is key to understanding European socialist cultures and to making sense of developments after the end of the Cold War and the enduring global legacy of socialism.
AUTHOR BIOGRAPHY
Anikó Imre is Associate Professor and Chair of Critical Studies in the School of Cinematic Arts at the University of Southern California. She is the author of Identity Games: Globalization and the Transformation of Media Cultures in the New Europe.
REVIEWS
-- David Sockol H-Socialisms, H-Net Reviews

Introduction. Why Do We Need to Talk about Socialism and TV?  1

Part I. Genres of Realism and Reality

1. From Socialist Realism to Emotional Realism  27