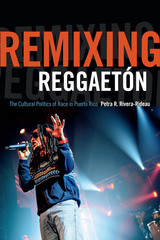 Puerto Rico is often depicted as a "racial democracy" in which a history of race mixture has produced a racially harmonious society. In Remixing Reggaetón, Petra R. Rivera-Rideau shows how reggaetón musicians critique racial democracy's privileging of whiteness and concealment of racism by expressing identities that center blackness and African diasporic belonging. Stars such as Tego Calderón criticize the Puerto Rican mainstream's tendency to praise black culture but neglecting and marginalizing the island's black population, while Ivy Queen, the genre's most visible woman, disrupts the associations between whiteness and respectability that support official discourses of racial democracy. From censorship campaigns on the island that sought to devalue reggaetón, to its subsequent mass marketing to U.S. Latino listeners, Rivera-Rideau traces reggaetón's origins and its transformation from the music of San Juan's slums into a global pop phenomenon. Reggaetón, she demonstrates, provides a language to speak about the black presence in Puerto Rico and a way to build links between the island and the African diaspora.
AUTHOR BIOGRAPHY
Petra R. Rivera-Rideau is Assistant Professor of Africana Studies at Virginia Tech.
REVIEWS
-- Deborah Pacini Hernandez Canadian Journal of Latin American and Caribbean Studies