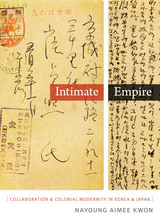 In Intimate Empire Nayoung Aimee Kwon examines intimate cultural encounters between Korea and Japan during the colonial era and their postcolonial disavowal. After the Japanese empire’s collapse in 1945, new nation-centered histories in Korea and Japan actively erased these once ubiquitous cultural interactions that neither side wanted to remember.  Kwon reconsiders these imperial encounters and their contested legacies through the rise and fall of Japanese-language literature and other cultural exchanges between Korean and Japanese writers and artists in the Japanese empire. The contrast between the prominence of these and other forums of colonial-era cultural collaboration between the colonizers and the colonized, and their denial in divided national narrations during the postcolonial aftermath, offers insights into the paradoxical nature of colonial collaboration, which Kwon characterizes as embodying desire and intimacy with violence and coercion. Through the case study of the formation and repression of imperial subjects between Korea and Japan, Kwon considers the imbrications of colonialism and modernity and the entwined legacies of colonial and Cold War histories in the Asia-Pacific more broadly.
AUTHOR BIOGRAPHY
Nayoung Aimee Kwon is Andrew W. Mellon Assistant Professor of Asian and Middle Eastern Studies at Duke University.
REVIEWS
-- Jooyeon Rhee Acta Koreana

On Naming, Romanization, and Translations  xiii

1. Colonial Modernity and the Conundrum of Representation  1