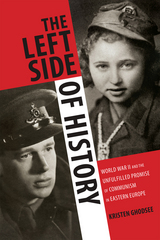 In The Left Side of History Kristen Ghodsee tells the stories of partisans fighting behind the lines in Nazi-allied Bulgaria during World War II: British officer Frank Thompson, brother of the great historian E.P. Thompson, and fourteen-year-old Elena Lagadinova, the youngest female member of the armed anti-fascist resistance. But these people were not merely anti-fascist; they were pro-communist, idealists moved by their socialist principles to fight and sometimes die for a cause they believed to be right. Victory brought forty years of communist dictatorship followed by unbridled capitalism after the fall of the Berlin Wall in 1989. Today in democratic Eastern Europe there is ever-increasing despair, disenchantment with the post-communist present, and growing nostalgia for the communist past. These phenomena are difficult to understand in the West, where “communism” is a dirty word that is quickly equated with Stalin and Soviet labor camps. By starting with the stories of people like Thompson and Lagadinova, Ghodsee provides a more nuanced understanding of how communist ideals could inspire ordinary people to make extraordinary sacrifices.
AUTHOR BIOGRAPHY
Kristen Ghodsee is Professor of Gender and Women's Studies at Bowdoin College and a former Guggenheim Fellow. She is the author of Lost in Transition: Ethnographies of Everyday Life after Communism, also published by Duke University Press.
REVIEWS
-- Robert Legvold Foreign Affairs

A Note on Transliteration xxi

Part I. The Way We Remember the Past Determines Our Dreams for the Future

12. Words of One Brother on the Death of Another 97

Part II. The Remains of the Regime

Conclusion. On the Outskirts of Litakovo 187