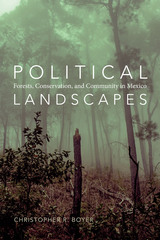 Following the 1917 Mexican Revolution inhabitants of the states of Chihuahua and Michoacán received vast tracts of prime timberland as part of Mexico's land redistribution program. Although locals gained possession of the forests, the federal government retained management rights, which created conflict over subsequent decades among rural, often indigenous villages; government; and private timber companies about how best to manage the forests. Christopher R. Boyer examines this history in Political Landscapes, where he argues that the forests in Chihuahua and Michoacán became what he calls "political landscapes"—that is, geographies that become politicized by the interactions between opposing actors—through the effects of backroom deals, nepotism, and political negotiations. Understanding the historical dynamic of community forestry in Mexico is particularly critical for those interested in promoting community involvement in the use and conservation of forestlands around the world. Considering how rural and indigenous people have confronted, accepted, and modified the rationalizing projects of forest management foisted on them by a developmentalist state is crucial before community management is implemented elsewhere.
AUTHOR BIOGRAPHY
Christopher R. Boyer is Professor of History and Latin American and Latino Studies at the University of Illinois, Chicago. He is the editor of A Land between Waters: Environmental Histories of Modern Mexico.
REVIEWS
-- Thomas Klubock American Historical Review

Part I. The Making of Revolutionary Forestry

Conclusion. Slivers of Hope in the Neoliberal Forest  239