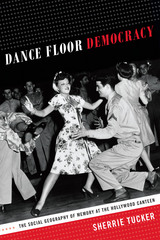 Open from 1942 until 1945, the Hollywood Canteen was the most famous of the patriotic home front nightclubs where civilian hostesses jitterbugged with enlisted men of the Allied Nations. Since the opening night, when the crowds were so thick that Bette Davis had to enter through the bathroom window to give her welcome speech, the storied dance floor where movie stars danced with soldiers has been the subject of much U.S. nostalgia about the "Greatest Generation." Drawing from oral histories with civilian volunteers and military guests who danced at the wartime nightclub, Sherrie Tucker explores how jitterbugging swing culture has come to represent the war in U.S. national memory. Yet her interviewees' varied experiences and recollections belie the possibility of any singular historical narrative. Some recall racism, sexism, and inequality on the nightclub's dance floor and in Los Angeles neighborhoods, dynamics at odds with the U.S. democratic, egalitarian ideals associated with the Hollywood Canteen and the "Good War" in popular culture narratives. For Tucker, swing dancing's torque—bodies sharing weight, velocity, and turning power without guaranteed outcomes—is an apt metaphor for the jostling narratives, different perspectives, unsteady memories, and quotidian acts that comprise social history.
AUTHOR BIOGRAPHY
Sherrie Tucker is Professor of American Studies at the University of Kansas. She is the author of Swing Shift: "All-Girl" Bands of the 1940s and coeditor of Big Ears: Listening for Gender in Jazz Studies, both also published by Duke University Press.
REVIEWS
-- Gayle Wald Journal of Popular Music Studies

Part I. On Location: Situating the Hollywood Canteen (and Swing Culture as National Memory) in Wartime Los Angeles

1. Wrestling Hollywood to the Map 25

3. Operating from the Curbstone 76

Part III. Women in Uniforms, Men in Aprons: Dancing outside the Soldier-Hostess Dyad

Part IV. Swing Between the Nation and the State

10. (Un)American Patrol: Following the State on the Dance Floor of the Nation 243

11. The Making(s) of National Memory: Hollywood Canteen (the Movie) 281