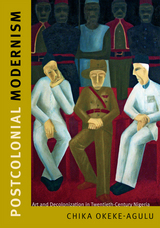 Written by one of the foremost scholars of African art and featuring 129 color images, Postcolonial Modernism chronicles the emergence of artistic modernism in Nigeria in the heady years surrounding political independence in 1960, before the outbreak of civil war in 1967. Chika Okeke-Agulu traces the artistic, intellectual, and critical networks in several Nigerian cities. Zaria is particularly important, because it was there, at the Nigerian College of Arts, Science and Technology, that a group of students formed the Art Society and inaugurated postcolonial modernism in Nigeria. As Okeke-Agulu explains, their works show both a deep connection with local artistic traditions and the stylistic sophistication that we have come to associate with twentieth-century modernist practices. He explores how these young Nigerian artists were inspired by the rhetoric and ideologies of decolonization and nationalism in the early- and mid-twentieth century and, later, by advocates of negritude and pan-Africanism. They translated the experiences of decolonization into a distinctive "postcolonial modernism" that has continued to inform the work of major Nigerian artists.
AUTHOR BIOGRAPHY
Chika Okeke-Agulu is an artist, curator, and Associate Professor in the Department of Art & Archaeology and the Center for African American Studies at Princeton University. He is a coauthor of Contemporary African Art since 1980 and coeditor (with Okwui Enwezor and Salah M. Hassan) of Nka: Journal of Contemporary African Art, also published by Duke University Press.
REVIEWS
-- Tajudeen Sowole The Guardian (Lagos)

1. Colonialism and the Educated Africans 21

3. The Academy and the Avant-Garde 71

6. Contesting the Modern: Artists' Societies and Debates on Art 227