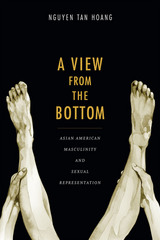 A View from the Bottom offers a major critical reassessment of male effeminacy and its racialization in visual culture. Examining portrayals of Asian and Asian American men in Hollywood cinema, European art film, gay pornography, and experimental documentary, Nguyen Tan Hoang explores the cultural meanings that accrue to sexual positions. He shows how cultural fantasies around the position of the sexual "bottom" overdetermine and refract the meanings of race, gender, sexuality, and nationality in American culture in ways that both enable and constrain Asian masculinity. Challenging the association of bottoming with passivity and abjection, Nguyen suggests ways of thinking about the bottom position that afford agency and pleasure. A more capacious conception of bottomhood—as a sexual position, a social alliance, an affective bond, and an aesthetic form—has the potential to destabilize sexual, gender, and racial norms, suggesting an ethical mode of relation organized not around dominance and mastery but around the risk of vulnerability and shame. Thus reconceived, bottomhood as a critical category creates new possibilities for arousal, receptiveness, and recognition, and offers a new framework for analyzing sexual representations in cinema as well as understanding their relation to oppositional political projects.
AUTHOR BIOGRAPHY
Nguyen Tan Hoang is Assistant Professor of English and Film Studies at Bryn Mawr College. He is also a videomaker whose works include K.I.P, Forever Bottom!, PIRATED! and look_im_azn.  His videos have been screened at the Museum of Modern Art, The Getty Center, and the Centre Pompidou.
REVIEWS
-- John Erickson Lambda Literary Review

2. Relfections on an Asian Bottom 71