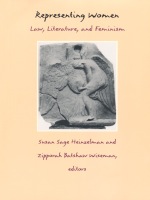 This anthology explores the provocative intersection between feminist, literary, and legal theories. Written by feminist thinkers from law and literature, discourses that each produce culturally powerful representations of women, these essays contest the boundaries that usually separate these disciplines and thereby alter the possibilities of those representations that have traditionally disempowered women.
Beginning with an exploration of the ways in which women are represented—how they either tell or have their stories told in literature, in the law, in a courtroom—this collection demonstrates the interrelatedness of the legal and the literary. Whether considering the status of medieval women readers or assessing the effectiveness and extent of contemporary rape law reform, the essays show that power first comes with telling one’s own story, and that the degree and effect of that power are determined by the cultural significance of the forum in which the story is presented. But telling the story is not enough. One must also be aware of how the story is contained within traditional constructs or boundaries and is thus limited in its effects, as Carol Sanger’s essay on mothers and legal/sexual identity makes clear. One must also recognize how a story might perpetuate an ideological agenda that is not in the best interests of the storyteller, as Elizabeth Butler Cullingford shows in her reading of Yeats’s "Leda and the Swan" and one must know the historical context of a story and of its telling, as Anne B. Goldstein’s essay on lesbian narratives discloses.
Breaking down the boundaries between law and literature, this anthology makes evident the ways in which the effect of women’s stories has been constrained and expands the range of possibilities for those who represent women, tell women’s stories, or present women’s issues. Representing Women makes the retelling of old stories about women compelling and the telling of new ones both necessary and possible.

Susan Sage Heinzelman is Associate Professor of English at the University of Texas, Austin.

Zipporah Batshaw Wiseman is Thomas H. Law Centennial Professor of Law at the University of Texas School of Law.

I. Law and Literature: Breaking Down the Walls

From Class Actions to "Miss Saigon": The Concept of Representation in the Law / Martha Minow

The Narrative and the Normative in Legal Scholarship / Kathryn Abrams

Commonalities: On Being Black and White, Different and the Same / Judy Scales-Trent

Less than Pornography: The Power of Popular Fiction / Carol Sanger

Pornography and Canonicity: The Case of Yeats's "Leda and the Swan" / Elizabeth Butler Cullingford

Sex at Work / Susan B. Estrich

Guilty in Law, Implausible in Fiction: Jurisprudential and Literary Narratives in the Case of Mary Blandy, Parricide, 1752 / Susan Sage Heinzelman

Representing the Lesbian in Law and Literature / Anne B. Goldstein