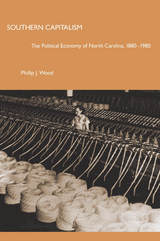 Southern Capitalism challenges prevailing views of Southern development by arguing that the persisting peculiarities of the Southern economy—such as low wages and high poverty rates—have not resulted from barriers to capitalist development, nor from the lingering influence of planter values. Wood argues that these peculiarities can instead be best understood as the consequence of a strategy of capitalist development, based on the creation and preservation of social conditions and relations conducive to the above-average exploitation of labor by capital. focusing on the evolving relationship between capital and labor as the core of this strategy, Wood follows the process of capitalist industrialization in North Carolina from its beginnings in the aftermath of the Civil War to the 1980s.
TABLE OF CONTENTS