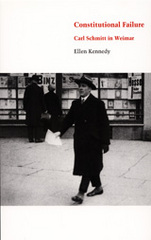 Constitutional Failure is a major contribution to studies of the German political philosopher Carl Schmitt (1888–1985), the Weimar Republic, and the relationship of constitutionalism, political economy, and democracy. An internationally renowned scholar of Weimar legal theory, Ellen Kennedy brought Schmitt’s neglected work to the attention of English-speaking readers with her highly regarded translations of his work and studies of its place in twentieth-century political theory. In this eagerly awaited book, she tracks Schmitt’s contribution to the canon of Western political philosophy during its most difficult and dangerous moment—the time of Weimar Germany and the Third Reich—demonstrating the centrality of his thought to understandings of the modern constitutional state and its precarious economic and social foundations.

Kennedy reveals how Schmitt’s argument for a strong but neutral state supported the maximization of market freedom at the cost of the political constitution. She argues that the major fault lines of Weimar liberalism—emergency powers, the courts as “defenders of the constitution,” mass mobilization of anti-liberal politics, ethnic-identity politics, a culture of resentment and contested legitimacy—are not exceptions within the liberal-democratic orders of the West, but central to them. Contending that Schmitt’s thought remains vital today because liberal norms are inadequate to the political challenges facing constitutional systems as diverse as those of Eastern Europe and the United States, Kennedy develops a compelling, rigorous argument that unsettles many assumptions about liberalism, democracy, and dictatorship.

Ellen Kennedy is Professor of Political Science at the University of Pennsylvania. Among her books are The Bundesbank: Germany’s Central Bank in the International Monetary System; Freedom and the Open Society: Henri Bergson’s Contribution to Political Philosophy; and the English translation of Carl Schmitt’s Crisis of Parliamentary Democracy.

REVIEWS
“Ellen Kennedy connects the theoretical and practical aspects of Schmitt’s writings in an unprecedented way. Scholars have endlessly speculated about the relationship between the ambiguous content of Schmitt’s thought and the undeniable facts surrounding his political actions: Kennedy is on much firmer ground than any other English-language scholar in bringing the two together.”—John P. McCormick, author of Carl Schmitt’s Critique of Liberalism: Against Politics as Technology


“Constitutional Failure provides a useful antidote for the talk dominant today of deliberative democracy, procedures, and dialogue, and so contributes in important ways to contemporary political theory as well as to an understanding of Carl Schmitt.”—David Dyzenhaus, editor of Law as Politics: Carl Schmitt’s Critique of Liberalism

2. The Sovereign Moment: Sources of Schmitt’s Theory of tIntroduction 1
he State 38

4. The Political and Its Theory 92