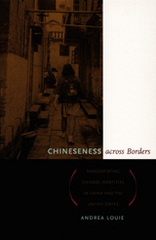 What happens when Chinese American youths travel to mainland China in search of their ancestral roots, only to realize that in many ways they still feel out of place, or when mainland Chinese realize that the lives of the Chinese abroad may not be as good as they had imagined? By considering programs designed to facilitate interactions between overseas Chinese and their ancestral homelands, Andrea Louie highlights how these programs not only create opportunities for new connections but also reveal the disjunctures that now separate Chinese Americans from China and mainland Chinese from the Chinese abroad.

Louie focuses on “In Search of Roots,” a program that takes young Chinese American adults of Cantonese descent to visit their ancestral villages in China’s Guangdong province. Through ethnographic interviews and observation, Louie examines the experiences of Chinese Americans both during village visits in China and following their participation in the program, which she herself took part in as an intern and researcher. She presents a vivid portrait of two populations who, though connected through family ties generations back, are meeting for the first time in the context of a rapidly changing contemporary China. Louie situates the participants’ and hosts’ shifting understandings of China and Chineseness within the context of transnational flows of people, media, goods, and money; China’s political and economic policies; and the racial and cultural politics of the United States.

REVIEWS
“Andrea Louie provides an engaging ethnography of the dual investment of mainland Chinese and Chinese American youth in defining what it is to be Chinese in diaspora. Louie’s attention to the role of the Chinese state in fostering ‘geneological tourism’ helps to break new ground in Asian American and diaspora studies.”—Kamala Visweswaran, author of Fictions of Feminist Ethnography


“Andrea Louie seamlessly guides a discussion of China and Chinese America from the difficult topography of race and nation to the heartfelt search for the understanding of ancestry and home.”—Shawn Wong, author of the novel American Knees


“Andrea Louie’s work heralds a new and important phase in the anthropology of transnationalism and globalization. She has produced a very convincing and elegantly nuanced ethnographic exploration of Chinese and Chinese American negotiations of ‘Chineseness.’”—Martin F. Manalansan IV, author of Global Divas: Filipino Gay Men in the Diaspora

2 Welcome Home!(?): Crafting a Sense of Place in the United States through the In Search of Roots Homeland Tour 69

5 The Descendants of the Dragon Gather: The Youth Festival as Encounter between the Chinese and the Chinese American Other 161