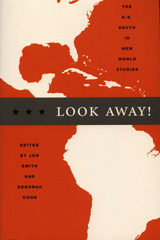 Look Away! considers the U.S. South in relation to Latin America and the Caribbean. Given that some of the major characteristics that mark the South as exceptional within the United States—including the legacies of a plantation economy and slave trade—are common to most of the Americas, Look Away! points to postcolonial studies as perhaps the best perspective from which to comprehend the U.S. South. At the same time it shows how, as part of the United States, the South—both center and margin, victor and defeated, and empire and colony—complicates ideas of the postcolonial. The twenty-two essays in this comparative, interdisciplinary collection rethink southern U.S. identity, race, and the differences and commonalities between the cultural productions and imagined communities of the U.S. South and Latin America.

Look Away! presents work by respected scholars in comparative literature, American studies, and Latin American studies. The contributors analyze how writers—including the Martinican Edouard Glissant, the Cuban-American Gustavo Pérez Firmat, and the Trinidad-born, British V. S. Naipaul—have engaged with the southern United States. They explore William Faulkner’s role in Latin American thought and consider his work in relation to that of Gabriel García Márquez and Jorge Luis Borges. Many essays re-examine major topics in southern U.S. culture—such as race, slavery, slave resistance, and the legacies of the past—through the lens of postcolonial theory and postmodern geography. Others discuss the South in relation to the U.S.–Mexico border. Throughout the volume, the contributors consistently reconceptualize U.S. southern culture in a way that acknowledges its postcolonial status without diminishing its distinctiveness.

Jon Smith is Assistant Professor of English at the University of Montevallo in Montevallo, Alabama.

Deborah Cohn is Associate Professor of Spanish and Portuguese at Indiana University, Bloomington. She is the author of History and Memory in the Two Souths: Recent Southern and Spanish American Fiction.

REVIEWS
“Look Away! is an important collection that expands the vocabularies and national symbol systems that scholars can deploy to think comparatively about the Americas. It is especially useful in breaking the binary between North and South that has so restricted southern literary and historical studies.”—Patricia Yaeger, author of Dirt and Desire: Reconstructing Southern Women’s Writing

1. THE U.S. SOUTH AND THE CARIBBEAN

A New World Poetics of Oblivion / George B. Handley 25

Slave Resistance on the Southeastern Frontier: Fugitives, Maroons, and Banditti in the Age of Revolution / Jane Landers 80

Citizenship and Identity in the Exile: Autobiographies of Gustavo Perez Firmat / Steven Hunsaker 130

Travel and Transference: V.S. Naipaul and the Plantation Past / Leigh Anne Duke 150

This Race Which Is Not One: The “More Inextricable Compositeness” of William Faulkner’s South / John T. Matthews 201

Richard Wright: From the South to Africa---and Beyond / Richard King 227

Forward into the Past: California and the Contemporary White Southern Imagination / Robert H. Brinkmeyer Jr. and Debra Rae Cohen 251

Wonder and the Wounds of “Southern” Histories / Stephanie Merrim 311

William Faulkner and the Cold War: The Politics of Cultural Marketing / Helen Oakley 405

4. FROM PLANTATION TO HACIENDA: GREATER MEXICO AND THE U.S. SOUTH