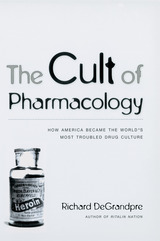 America had a radically different relationship with drugs a century ago. Drug prohibitions were few, and while alcohol was considered a menace, the public regularly consumed substances that are widely demonized today. Heroin was marketed by Bayer Pharmaceuticals, and marijuana was available as a tincture of cannabis sold by Parke Davis and Company.

Exploring how this rather benign relationship with psychoactive drugs was transformed into one of confusion and chaos, The Cult of Pharmacology tells the dramatic story of how, as one legal drug after another fell from grace, new pharmaceutical substances took their place. Whether Valium or OxyContin at the pharmacy, cocaine or meth purchased on the street, or alcohol and tobacco from the corner store, drugs and drug use proliferated in twentieth-century America despite an escalating war on “drugs.”

Richard DeGrandpre, a past fellow of the National Institute on Drug Abuse and author of the best-selling book Ritalin Nation, delivers a remarkably original interpretation of drugs by examining the seductive but ill-fated belief that they are chemically predestined to be either good or evil. He argues that the determination to treat the medically sanctioned use of drugs such as Miltown or Seconal separately from the illicit use of substances like heroin or ecstasy has blinded America to how drugs are transformed by the manner in which a culture deals with them.

Bringing forth a wealth of scientific research showing the powerful influence of social and psychological factors on how the brain is affected by drugs, DeGrandpre demonstrates that psychoactive substances are not angels or demons irrespective of why, how, or by whom they are used. The Cult of Pharmacology is a bold and necessary new account of America’s complex relationship with drugs.

Richard DeGrandpre is an independent scholar of drugs and other “technologies of the self.” He has a doctorate in psychopharmacology and was a fellow of the National Institute on Drug Abuse. He is the author of Ritalin Nation: Rapid-Fire Culture and the Transformation of Human Consciousness and Digitopia: The Look of the New Digital You. He has also written numerous scientific, theoretical, and popular articles on drugs and is a former senior editor at Adbusters magazine.

REVIEWS
“The Cult of Pharmacology brings badly needed information, insight, and—above all—sanity to the emotionally charged debate over legal and illegal drugs in America, whether LSD, caffeine, or Prozac. This book should be required reading for those whose lives are touched by the war on drugs—which of course means all of us.”—John Horgan, author of The End of Science, The Undiscovered Mind, and Rational Mysticism


“Every decade or two a book comes along that causes a fundamental shift of gaze. Richard DeGrandpre’s The Cult of Pharmacology is one. It pulls apart the mythic powers we have attributed to drugs, showing that drug effects are not the products of mere molecules alone but of the deeply politicized meanings inscribed upon them by society which shape how they are used. This book charts a new course beyond the repressive excesses and costly failures of punitive prohibition. It will make fascinating reading for citizens concerned with drug use and drug problems; it should be required reading for policymakers.”—Craig Reinarman, coeditor of Crack in America and coauthor of Cocaine Changes


“Those coming to this book with preconceptions should divest them before starting, or at least try to remain calm. Those who think a book on the role drugs play in our culture cannot possibly surprise them are likely to discover preconceptions they never suspected. This is one of the best books to read if you are coming new to the problems that drugs pose, and also one of the best books for those who think they know everything there is to know about drugs. This is a wonderful book.”—David Healy, author of Let Them Eat Prozac: The Unhealthy Relationship between the Pharmaceutical Industry and Depression

Part One. End of a Century

Part Three. While at War

Appendix One. Escalation of American Drug Laws in the Twentieth Century 243