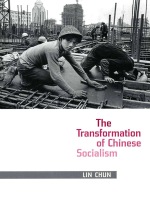 In this significant contribution to both political theory and China studies, Lin Chun provides a critical assessment of the scope and limits of socialist experiments in China, analyzing their development since the victory of the Chinese communist revolution in 1949 and reflecting on the country&rsquo;s likely paths into the future. Lin suggests that China&rsquo;s twentieth-century trajectory be grasped in terms of the collective search by its people for a modern alternative to colonial modernity, bureaucratic socialism, and capitalist subordination. Evaluating contending interpretations of the formation and transformation of Chinese socialism in the contemporary conditions of global capitalism, Lin argues that the post-Mao reform model must be remade.
AUTHOR BIOGRAPHY

Lin Chun teaches comparative politics at the London School of Economics and Political Science. She is the editor of the three-volume collection China and the author of The British New Left.

REVIEWS
“The Transformation of Chinese Socialism is a visionary and critical reorientation for social theory. It is a great reminder of what the stakes are just now and why socialism, far from being defunct, has as much to offer governance theories and policy planners as it always has.”—Tani E. Barlow, author of The Question of Women in Chinese Feminism


“While most people have already cast China as a capitalist country with a communist government, Lin Chun shows that there may be life in Chinese socialism yet. Combining erudition, passion, and an engaging writing style, Lin challenges a lot of conventional wisdom about China. This book should be on the shelf of everyone who has any interest in the course of the Chinese economy and society.”—Meghnad Desai, author of Marx’s Revenge: The Resurgence of Capitalism and the Death of Statist Socialism


“With quite exceptional historical and theoretical insight, Lin Chun examines what remains of the Chinese Revolution’s socialist legacy and explores the prospects for the rebirth of a new kind of Chinese socialism in the People's Republic. This very original and thought-provoking study is essential reading for those concerned about the future of China and the fate of socialism in the age of capitalist globalization.”—Maurice Meisner, author of Mao’s China and After: A History of the People’s Republic

Introduction: The Making and Remaking of the Chinese Model 1