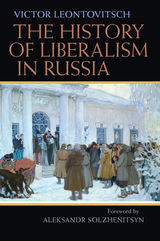 The influence of liberalism in tsarist Russia is deeply problematic to most historians. In this highly original study, Victor Leontovitsch offers a reinterpretation of liberalism in a uniquely Russian form. He documents the struggles to develop civil society and individual liberties in imperial Russia up until their ultimate demise in the face of war, revolution, and the collapse of the old regime.

From Catherine the Great’s proposal of freedom for serfs born after a predetermined year, through the creation of zemstvos by Alexander II, and the emergence of the State Duma and a quasi-constitutional monarchy under Nicholas II, Leontovitsch chronicles the ebb and flow of liberal thought and action in the difficult circumstances of tsarist Russia. He cites numerous examples of debates over civil rights, property laws, emancipation, local jurisdiction, political rights, and constitutional proposals. Focusing on liberal reforms and reformers within the governing elite, Leontovitsch draws important distinctions between factions of radical (but fundamentally illiberal) progressives and true (but often concealed) liberalism.

This is the first English-language translation of Leontovitsch’s monumental work, which was originally published to critical acclaim in German in 1957. Aleksandr Solzhenitsyn sponsored a Russian edition in 1980, and his introduction is translated for the foreword of this edition. With a wide readership in today’s Russia, The History of Liberalism in Russia continues to resonate as a penetrating analysis of the historical precedents of liberal thought and its potential as a counterweight to current autocratic tendencies and the uncertainties of Russia’s political future.

Victor Leontovitsch was a lecturer at the Friedrich Wilhelm University, Berlin, and professor of history at Frankfurt University. He was the author of The Legal Revolution under Ivan the Terrible.

TABLE OF CONTENTS
Contents
Foreword by Aleksandr Solzhenitsyn
Preface
Notes on the Translation
Introduction
Part 1: The History of Liberalism, 1762–1855
Chapter 1: Catherine II
Chapter 2: Alexander I
Chapter 3: Speransky
Chapter 4: Karamzin
Chapter 5: The Codification of the Law
Chapter 6: Nicholas I
Chapter 7: Nicholas I (continued)
Part 2: The Development of Civil Liberty, 1856–1914
Chapter 8: The Emancipation of the Serfs
Chapter 9: The Emancipation Laws and Their Later Interpretation
Chapter 10: Peasant Law
Chapter 11: The Peasant Question in the Reign of Alexander III
Chapter 12: The Peasant Question in the Reign of Nicholas II before 1905
Chapter 13: The Agrarian Program of the Left-Wing Parties
Chapter 14: The Peasant Question after 1905
Chapter 15: The Peasant Question after 1905 (continued)
Part 3: The Development of Political Liberty, 1856–1914
Chapter 16: The History of Political Liberalism in the Reign of Alexander II
Chapter 17: The Period from 1881 to 1902
Chapter 18: The Liberation Movement
Chapter 19: Liberalism in 1904
Chapter 20: The Zemstvo Congresses
Chapter 21: Further Zemstvo Congresses and the Aggravation of the Revolutionary Situation
Chapter 22: The Manifesto of October 17, 1905, and the Constitution of April 23, 1906
Chapter 23: Witte and Public Opinion
Chapter 24: The Constitutional-Democratic Party and the Union of October 17
Chapter 25: The First Duma
Chapter 26: The Second Duma
Chapter 27: The Coup of June 3, 1907, and the Third and Fourth Dumas
Notes
Index of Names
REQUEST ACCESSIBLE FILE