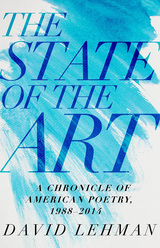 The acclaimed annual, The Best American Poetry, is the most prestigious showcase of new poetry in the United States and Canada. Each year since the series began in 1988, David Lehman has contributed a foreword, and this has evolved into a sort of state-of-the-art address that surveys new developments and explores various matters facing poets and their readers today. This book collects all twenty-nine forewords (including the two written for the retrospective “Best of the Best” volumes for the tenth and twenty-fifth anniversaries.)  Beginning with a new introduction by Lehman and a foreword by poet Denise Duhamel (guest editor for The Best American Poetry 2013), the collection conveys a sense of American poetry in the making, year by year, over the course of a quarter of a century.
AUTHOR BIOGRAPHY
David Lehman’s books of poetry include New and Selected Poems, Yeshiva Boys, When a Woman Loves a Man, The Evening Sun, The Daily Mirror, and Valentine Place. He has edited The Oxford Book of American Poetry. A Fine Romance: Jewish Songwriters, American Songs, the most recent of his six nonfiction books, won the Deems Taylor Award from the American Society of Composers, Authors, and Publishers (ASCAP) in 2010. Lehman teaches in the graduate writing program of the New School in New York City.
TABLE OF CONTENTS
Contents
Foreword by Denise Duhamel
Acknowledgments
Introduction
1988. “like dropping a rose petal down the Grand Canyon and waiting for the echo”
1989. in an unlit alcove where bookstore patrons fear to tread
1990. to inflame passions, disturb the complacent, and arouse the anxiety of despots
1991. a poem entitled “Cigarettes” by a poet named Ash
1992. The question of poetry and its audience
1993. the gust of fresh air that turned into the blizzard of ’93
1994. It’s safe to say that the inaugural was the best-attended poetry reading of the decade
1995. At least somebody played ball in 1994
1996. a given volume in this series might hang question marks over all three terms in the title
1997. As a gimmick, if that’s what it is, National Poetry Month worked
The Best of the Best American Poetry, 1988–1997 (1998). The debate is joined
1998. The president spoke of having had to memorize 100 lines of Macbeth
1999. “Whitman rocks”
2000. “Now I know how poems feel”
2001. “Everybody else was analog and Nietzsche was digital”
2002. The day now marks a boundary
2003. “How many people have to die before you can become president?”
2004. canons do not remain fixed for long
2005. the creative writing workshop [and] the fall of civilization
2006. Accessibility—as a term and, implicitly, as a value
2007. Undoubtedly the most parodied of all poems
2008. Who says that hot poems can’t get you into trouble in 2008?
2009. “that is how I should talk if I could talk poetry”
2010. McChrystal sent copies of “The Second Coming” to his special operators
2011. in Dickinson’s brain, “wider than the sky”
2012. the “uncanny” is a category too little invoked
The Best of the Best American Poetry, 25th Anniversary Edition (2013). “Every time I read Pessoa I think”
2013. It was his poetry that kept him going
2014. In the antagonism between science and the humanities
Index of Names
REQUEST ACCESSIBLE FILE