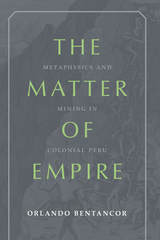 The Matter of Empire examines the philosophical principles invoked by apologists of the Spanish empire that laid the foundations for the material exploitation of the Andean region between 1520 and 1640. Centered on Potosi, Bolivia, Orlando Bentancor’s original study ties the colonizers’ attempts to justify the abuses wrought upon the environment and the indigenous population to their larger ideology concerning mining, science, and the empire's rightful place in the global sphere. Bentancor points to the underlying principles of scholasticism, particularly in the work of Thomas Aquinas, as the basis of the instrumentalist conception of matter and enslavement, despite the inherent contradictions to moral principles. Bentancor grounds this metaphysical framework in a close reading of sixteenth-century debates on Spanish sovereignty in the Americas and treatises on natural history and mining by theologians, humanists, missionaries, mine owners, jurists, and colonial officials. To Bentancor, their presuppositions were a major turning point for colonial expansion and paved the way to global mercantilism.
AUTHOR BIOGRAPHY
Orlando Bentancor is assistant professor of Spanish and Latin American cultures at Barnard College.
TABLE OF CONTENTS
Contents
Acknowledgments
Introduction: Imperium, Metaphysical Instrumentalism, and Potosí Mining
1. Grounding the Empire: Francisco de Vitoria’s Political Physics
2. The Impasses of Instrumentalism: Revisiting the Polemics between Sepúlveda and Las Casas
3. Mastering Nature: José de Acosta’s Pragmatic Instrumentalism
4. From Imperial Reason to Instrumental Reason: The Ideology of the Circle of Toledo
5. The Exhaustion of Natural Subordination: Solórzano Pereira and the Demise of Metaphysical Instrumentalism
Notes
Bibliography
Index
REQUEST ACCESSIBLE FILE