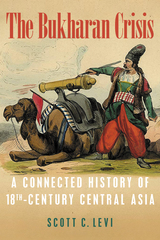 BUY FROM
The Bukharan Crisis: A Connected History of 18th Century Central Asia
by Scott C. Levi
University of Pittsburgh Press, 2020
Paper: 978-0-8229-4597-0
eISBN: 978-0-8229-8733-8
In the first half of the eighteenth century, Central Asia’s Bukharan Khanate descended into a crisis from which it would not recover. Bukharans suffered failed harvests and famine, a severe fiscal downturn, invasions from the north and the south, rebellion, and then revolution. To date, efforts to identify the cause of this crisis have focused on the assumption that the region became isolated from early modern globalizing trends. The Bukharan Crisis exposes that explanation as a flawed relic of early Orientalist scholarship on the region.

In its place, Scott Levi identifies multiple causal factors that underpinned the Bukharan crisis. Some of these were interrelated and some independent, some unfolded over long periods while others shocked the region more abruptly, but they all converged in the early eighteenth century to the detriment of the Bukharan Khanate and those dependent upon it. Levi applies an integrative framework of analysis that repositions Central Asia in recent scholarship on multiple themes in early modern Eurasian and world history
AUTHOR BIOGRAPHY
Scott C. Levi is professor of Central Asian history at The Ohio State University.
TABLE OF CONTENTS
Contents
Acknowledgments
Note on Geographic Terminology
Introduction
One: Bukhara in Crisis
Two: Silk Roads, Real and Imagined
Three: The Early Modern Silk Road
Four: The Crisis Revisited
Conclusion
Bibliography
Index
REQUEST ACCESSIBLE FILE