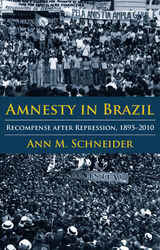 In 1895, forty-seven rebel military officers contested the terms of a law that granted them amnesty but blocked their immediate return to the armed forces. During the century that followed, numerous other Brazilians who similarly faced repercussions for political opposition or outright rebellion subsequently made claims to forms of recompense through amnesty. By 2010, tens of thousands of Brazilians had sought reparations, referred to as amnesty, for repression suffered during the Cold War–era dictatorship. This book examines the evolution of amnesty in Brazil and describes when and how it functioned as an institution synonymous with restitution. Ann M. Schneider is concerned with the politics of conciliation and reflects on this history of Brazil in the context of broader debates about transitional justice. She argues that the adjudication of entitlements granted in amnesty laws marked points of intersection between prevailing and profoundly conservative politics with moments and trends that galvanized the demand for and the expansion of rights, showing that amnesty in Brazil has been both surprisingly democratizing and yet stubbornly undemocratic.

Ann M. Schneider is a historian of Brazil and a specialist on Cold War–era conflicts and the subsequent transitional justice mechanisms utilized throughout Latin America.

“Amnesty in Brazil is a masterful overview of the politics of granting political amnesty to rebels and dissidents over the course of the twentieth century. Drawing on examples from the First Republic, the Vargas years, and the recent military dictatorship, Schneider offers an important contribution to the study of political reconciliation, restitution, and forgiveness, as well as its limitations, in crucial moments of Brazil’s tumultuous history since the establishment of the republic in 1889.” —James N. Green, Brown University


“Schneider offers an outstanding legal and intellectual history of amnesty in Brazil, demonstrating that amnesty has been central to the articulation and defense of rights, from the jurisprudence of Rui Barbosa in the late nineteenth century through the creation of the Amnesty Commission in the early 2000s. The author follows this thread from notable early cases like that of the ‘Black Admiral,’ José Cândido Felisberto, in 1910 through the tireless efforts of Victória Grabois to free herself from the shadow of the military dictatorship in recent Brazil, illuminating a struggle to define the meaning of amnesty and to fulfill its potential as a ‘purveyor of citizen rights.’ This gracefully written book clarifies both the continuities and changes in this trajectory.” —Bryan McCann, Georgetown University

TABLE OF CONTENTS
Contents
Acknowledgments
List of Acronyms
Introduction: The Calculus of Restitution in Brazil
Part I—Amnesty as Recourse, 1890s–1910
Prologue: Two Admirals
1. Linking Restitution to Amnesty, “Even though Superfluous,” 1890s
2. Amnesty as Penalty: An Inversion in the 1895 Law
3. The Shame of Amnesty: Black Sailors in Revolt, 1910
Part II—The Bureaucratization of Amnesty, 1930s–1940s
Prologue: The “Institution of Grace”
4. Revolutionaries and Bureaucrats: Amnesty in the Age of Vargas, 1930s
5. A Democratizing Amnesty under Renewed Repression, 1945–1960s
Part III—Amnesty and Transitional Justice, 1979–2010
Prologue: What Got Written Down
6. Preempting an Inevitable Amnesty: Purges in Petrobras, 1964–1985
7. Two Long Shadows: AI-5 and the Federal Police in São Paulo, 1970s–2000s
8. Connected to Amnesty: From a Clandestine Life to the Inter-American Court of Human Rights, 1964–2010
Epilogue: The Política of Amnesty in Brazil
Notes
Bibliography
Index
REQUEST ACCESSIBLE FILE