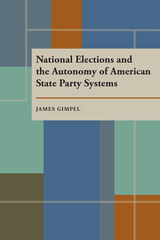 Traditional theories of party organization have emphasized two-party electoral competition as the force behind party unity in state politics. V. O. Key first advanced this theory in Southern Politics, where he concluded that party factionalism in the South was mainly attributable to the one-party character of the region. But this traditional theory does not fit all states equally well. In the states of the West, especially, parties are competitive, but political activity is centered on candidates, not parties.
The theory of candidate-centered politics allows Gimpel to explain why party factionalism has persisted in many regions of the United States in spite of fierce two-party competition. Using interviews, polling data, elections returns, and demographic information, Gimpel contends that major upheavals in the two-party balance of presidential voting may leave lower offices untouched.
AUTHOR BIOGRAPHY

James Gimpel is professor of government at the University of Maryland, College Park.

“Successfully shows that party strength and competition are not necessarily correlated and that the differences can be traced to the bases of partisan cleavages found in each state. . . . The author outlines the methods in a clear, straightforward manner that never allows technical jargon to obscure the arguments and direction of the work. . . . These qualities make the book particularly useful for demonstrating to advanced undergraduates or new postgraduates how to conduct social science research.” —American Politics Review

“Whatever their party loyalties may be in presidential elections, when it comes to voting at the state level, western voters have been influenced more by the appeal of individual candidates or state-related issues. . . . Readers will be rewarded by a provocative, well-argued thesis.” —Annals of the American Academy of Political and Social Sciences