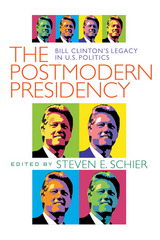 As America’s first truly postmodern president, Bill Clinton experienced both great highs and stunning lows in office that will shape the future course of American politics. Clinton will forever be remembered as the first elected president to be impeached, but will his tarnished legacy have lasting effects on America’s political system?

Including the conflict in Kosovo, the World Trade Organization meeting in Seattle, and new developments in the 2000 presidential campaign, The Postmodern Presidency is the most comprehensive and current assessment of Bill Clinton’s presidency available in print.

The book examines Clinton’s role in redefining the institution of the presidency, and his affect on future presidents’ economic and foreign policies. The contributors highlight the president’s unprecedented courtship of public opinion; how polls affected policy; how the president gained “celebrity” status; how Clinton’s “postmodern” style of public presidency helped him survive the 1994 elections and impeachment; and how all of this might impact future presidents.

This new text also demonstrates how the Clinton presidency changed party politics in the public and in Congress, with long-term implications and costs to both Republicans and his own Democratic party, while analyzing Clinton’s effect on the 1990s “culture wars,” the politics and importance of gender, and the politics and policy of race.

“Schier . . . has very ably edited what is certainly going to be one of many academic retrospectives of the Clinton presidency. . . . This book would make an especially timely and valuable collection fo undergraduate courses on the presidency.” --Choice