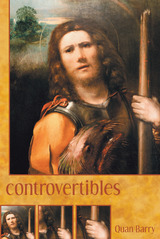 Controvertibles features more of the refined brilliance and delicate lyricism of this poet, cast in a more meditative mode. Throughout, she examines cultural objects by lifting them out of their usual settings and repositioning them in front of new, disparate backdrops. Doug Flutie's famous Hail Mary pass and Rutger Hauer's role in Blade Runner are contextualized within the Tibetan Book of the Dead. Bob Beamon's world-record-setting long jump in the 1968 Olympics is slowed down and examined in the style of The Matrix's revolutionary bullet time.

Samantha Smith, Richard Nixon, the Shroud of Turin, Igor Stravinsky, the largo from Handel's Xerxes, the resurrection of Lazarus, and the groundbreaking 1984 Apple Computer Super Bowl commercial are among the many disparate people and objects Barry uses to explore the multifaceted nature of existence.
AUTHOR BIOGRAPHY
Quan Barry is the author of two previous poetry collections: Asylum and Controvertibles. She is professor of English at the University of Wisconsin-Madison where she directs the MFA program in creative writing.
TABLE OF CONTENTS
Contents
the 1984 Apple Super Bowl commercial as intervention
Porte des Morts as Neutrino
the cabriolet as metempsychosis
the seahorse as transubstantiation
Pernkopf ’s Atlas as Interregnum
habeas corpus as confession
house fire as bildungsroman
the oboe in Handel’s largo from Xerxes as elegy
the short brutish life of Samantha Smith as control
aboriginal cave painting as difficulty
purdah as polemic
the Great Molasses Flood of 1919 as allegory
the landmine as opiate
Ridley Scott’s Gladiator as Partitive Genitive
the long jump as teleportation
mal amour as disciple
Dosso Dossi’s Saint George as Controvertible
crossing the South China Sea as analgesia
figurative poem as psychostasia
the last elephant in Burundi as vessel
Nick Drake’s “Pink Moon” as Infatuation
Hanging Rock as Intervention
domestic violence as Noh play
Pharaoh’s Daughter’s Motivation as New Criticism
the excavated foundations of the Salem Village parsonage as resipiscence
Rembrandt’s The Storm on the Sea of Galilee as Semiotics
Arctic Summer as Analogy
Rage Against the Machine as Plate Tectonics
Vietnamese Dictionary Definition as Self-Portrait
the final scene in Akira Kurosawa’s Ran as condition
Lazarus as Ambiguity
the Blue Grotto as gestation
Stravinsky’s [line diagram] as Approximation
“Jisas Yu Holem Hand Blong Mi” as Dream of Reunification
the knight’s soliloquy as vespers
the Shroud of Turin as admonition
Emmett Till’s Open Casket as La Pietà
self-immolation as self-immolation
snow angels as Michael Furey
untitled as apologia
Richard Nixon’s 1972 Christmas Bombing Campaign as Gospel
ultrasound as palinode
the finite as infinite
imitative fallacy as jeremiad
the long jump as bullet-time
Doug Flutie’s 1984 Orange Bowl Hail Mary as Water into Fire
winter tragedy as fire into air
Rutger Hauer’s Final Lines in Blade Runner as Air into Space
banh chung as aesthetic
Notes
Acknowledgments
REQUEST ACCESSIBLE FILE