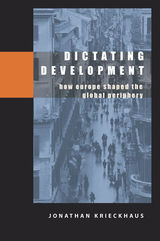 Dictating Development presents a powerful and original analysis of how colonialism has profoundly impacted the varying economic growth of developing nations. While previous studies have focused primarily on the domestic neoliberal policies of government and the political capacity of developing states, Dictating Development argues that economic growth is equally influenced (positively and negatively) by colonial powers. Jonathan Krieckhaus examines both historic colonial influences (on human capital and state structures) as well as contemporary ones (war, market access, and foreign aid). Based on an in-depth study of the regionally diverse nations of Mozambique, Korea, and Brazil, and a statistical analysis of growth in ninety-one countries from 1960 to 2000, Krieckhaus effectively demonstrates that most seemingly domestic political variables are in fact the byproduct of relationships with colonial powers. While not denying the role of neoliberalism as an important factor in development, Dictating Development reveals the roots of these policies: how colonialism influences the very nature of government and societal productivity.
AUTHOR BIOGRAPHY
Jonathan Krieckhaus is assistant professor of political science at the University of Missouri-Columbia.
REVIEWS

“In this admirable and important book Krieckhaus asks why some developing countries have experienced faster economic growth than others. Eschewing narrow and common answers, he refocuses our attention on the broader and deeper determinants located in the global milieu of developing countries. For all those interested in the political economy of development this is a must read.” --Atul Kohli, Princeton University

“This book offers a well-researched and persuasive argument about the external mechanisms that shape economic development. Krieckhaus's work systematically explores the impact that wars, colonial legacies, and external states have had on economic growth in developing countries. Given the recent tendency of scholars to emphasize the internal causes of economic growth over possible external causes, Dictating Development offers a welcome and timely addition to the development literature.” --Kent Eaton, Naval Postgraduate School