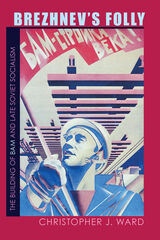 Heralded by Soviet propaganda as the “Path to the Future,” the Baikal-Amur Mainline Railway (BAM) represented the hopes and dreams of Brezhnev and the Communist Party elite of the late Soviet era. Begun in 1974, and spanning approximately 2,000 miles after twenty-nine years of halting construction, the BAM project was intended to showcase the national unity, determination, skill, technology, and industrial might that Soviet socialism claimed to embody.  More pragmatically, the Soviet leadership envisioned the BAM railway as a trade route to the Pacific, where markets for Soviet timber and petroleum would open up, and as an engine for the development of Siberia.

Despite these aspirations and the massive commitment of economic resources on its behalf, BAM proved to be a boondoggle-a symbol of late communism's dysfunctionality-and a cruel joke to many ordinary Soviet citizens. In reality, BAM was woefully bereft of quality materials and construction, and victimized by poor planning and an inferior workforce. Today, the railway is fully complete, but remains a symbol of the profligate spending and inefficiency that characterized the Brezhnev years.

In Brezhnev's Folly, Christopher J. Ward provides a groundbreaking social history of the BAM railway project. He examines the recruitment of hundreds of thousands of workers from the diverse republics of the USSR and other socialist countries, and his extensive archival research and interviews with numerous project workers provide an inside look at the daily life of the BAM workforce.  We see firsthand the disorganization, empty promises, dire living and working conditions, environmental damage, and acts of crime, segregation, and discrimination that constituted daily life during the project's construction.  Thus, perhaps, we also see the final irony of BAM: that the most lasting legacy of this misguided effort to build Soviet socialism is to shed historical light on the profound ills afflicting a society in terminal decline.

“Ward’s excellent history charts the rise and fall of a vast and impractical construction project. . . . Imparts both meaning and insight to everyday life in Brezhnev’s Soviet Union. . . . Ward excels at peopling BAM’s construction sites with a fascinating cast of belligerent, disorganized workers who drink, steal, worry about the environment, . . . and dream of amassing capital rather than building socialism. . . . A fine, readable work on a neglected topic that offers insights not just into the construction of BAM, but into the larger realm of youth culture and work culture under Brezhnev.”
—Technology and Culture


“This excellent monograph details the construction of one of the largest public works projects of all time, the Baikal-Amur Mainline (BAM) Railway. . . . The last instance of ‘Soviet gigantomania’ and a pet project of Leonid Brezhnev. . . BAM was envisioned as a demonstration of ideological fervor and Soviet prowess. . . . In fact, BAM was a disaster from start to finish. . . . Brezhnev’s Folly benefits from the author’s thorough familiarity with rich archival materials as well as personal interviews. . . . It deserves the attention of every specialist in modern Russian history.”
—The Russian Review


“Ward’s important study successfully situates BAM within Brezhnev’s ‘developed socialism,’ and it indicates the bankruptcy of late Soviet efforts to demonstrate the glories of enlightened rule. Important for specialists on Soviet politics and history, and more generally for historians of technology.”

TABLE OF CONTENTS
Contents
Preface
List of Acronyms and Terms
1. Introduction: The Project of the Century
2. Prometheanism versus Conservationism on the Railway
3. Crime and Corruption in BAM Society
Illustrations
4. Working Alone: Women on the Railway
5. National Differentiation and Marginalization on the Railway
6. The Rails of Fraternal Cooperation: BAMers Abroad and Foreigners at Home
7. Conclusion: Brezhnev’s Folly in Perspective
Notes
Selected Bibliography
Index
REQUEST ACCESSIBLE FILE