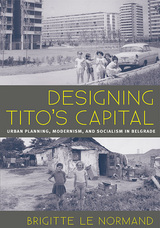 The devastation of World War II left the Yugoslavian capital of Belgrade in ruins. Communist Party leader Josip Broz Tito saw this as a golden opportunity to recreate the city through his own vision of socialism. In Designing Tito’s Capital, Brigitte Le Normand analyzes the unprecedented planning process called for by the new leader, and the determination of planners to create an urban environment that would benefit all citizens.

Led first by architect Nikola Dobrovic and later by Miloš Somborski, planners blended the predominant school of European modernism and the socialist principles of efficient construction and space usage to produce a model for housing, green space, and working environments for the masses. A major influence was modernist Le Corbusier and his Athens Charter published in 1943, which called for the total reconstruction of European cities, transforming them into compact and verdant vertical cities unfettered by slumlords, private interests, and traffic congestion.  As Yugoslavia transitioned toward self-management and market socialism, the functionalist district of New Belgrade and its modern living were lauded as the model city of socialist man.

The glow of the utopian ideal would fade by the 1960s, when market socialism had raised expectations for living standards and the government was eager for inhabitants to finance their own housing. By 1972, a new master plan emerged under Aleksandar Ðordevic, fashioned with the assistance of American experts. Espousing current theories about systems and rational process planning and using cutting edge computer technology, the new plan left behind the dream for a functionalist Belgrade and instead focused on managing growth trends. While the public resisted aspects of the new planning approach that seemed contrary to socialist values, it embraced the idea of a decentralized city connected by mass transit.