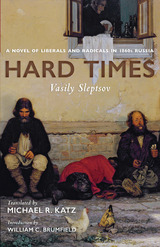 Vasily Sleptsov was a Russian social activist and writer during the politically charged 1860s, known as the “era of great reforms,” and marked by Alexander II’s emancipation of the serfs and the relaxation lifting of censorship. Popular in his day, Sleptsov’s contemporaries Leo Tolstoy and Anton Chekhov praised his writing:, with Chekhov once remarkeding, “Sleptsov taught me, better than most, to understand the Russian intelligent, and my own self as well.”
The novella Hard Times is considered Sleptsov’s most important work. It focused popular attention on the radical and liberal movements through its fictional setting, where the characters contend with constantly evolving political and social dilemmas. Hard Times was immediately recognized as a vibrant and compelling depiction of prerevolutionary Russian intellectual society, full of lively debates about the possibilities of liberal reform or radical revolution that questioned the viability of a political system facing massive social problems.
This is the first English-language version of Hard Times, expertly and fluidly translated by Michael Katz. Highly readable, it provides important historical insights on the political and social climate of a volatile and transformative period in Russia history.
AUTHOR BIOGRAPHY
Vasily Sleptsov (1836-1878) wrote fiction for several magazines, including Annals of the Fatherland, Russian Speech, and the Contemporary, where he published his novella Hard Times in 1865. He went on to found the magazine the Women’s Herald, establish the Znamenskaya commune for women, and become an activist for women’s equality.

Michael R. Katz is C.V. Starr Professor Emeritus at Middlebury College. He is the author of two monographs and is a renowned translator of Russian literature, and who has published English versions of Tolstoy, Dostoevsky, Turgenev, and Chekhov.