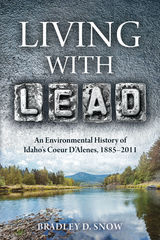 The Coeur d’Alenes, a twenty-five by ten mile portion of the Idaho Panhandle, is home to one of the most productive mining districts in world history. Historically the globe’s richest silver district and also one of the nation’s biggest lead and zinc producers, the Coeur d’Alenes’ legacy also includes environmental pollution on an epic scale. For decades local waters were fouled with tailings from the mining district’s more than one hundred mines and mills and the air surrounding Kellogg, Idaho was laced with lead and other toxic heavy metals issuing from the Bunker Hill Company’s smelter. The same industrial processes that damaged the environment and harmed human health, however, also provided economic sustenance to thousands of local residents and a string of proud, working-class communities. Living with Lead endeavors to untangle the costs and benefits of a century of mining, milling, and smelting in a small western city and the region that surrounds it.
AUTHOR BIOGRAPHY
Bradley D. Snow is assistant teaching professor at Montana State University.
TABLE OF CONTENTS
Contents
Acknowledgments
Introduction
1. Uncle Bunker’s Town
2. The Useful Metal: A Brief History of Lead
3. Lead Creek
4. Foul Humours
5. Raining Down Poison
6. On Lead’s Front Lines
7. A Brave New World
Conclusion
Epilogue
Notes
Glossary
Selected Bibliography
Index
REQUEST ACCESSIBLE FILE