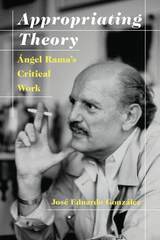 Angel Rama (1926-1983) is a major figure in Latin American literary and cultural studies, but little has been published on his critical work. In this study, José Eduardo González focuses on Rama’s response to and appropriation of European critics like Walter Benjamin, Theodor Adorno, and Georg Lukács. González argues that Rama realized the inapplicability of many of their theories and descriptions of cultural modernization to Latin America, and thus reworked them to produce his own discourse that challenged prevailing notions of social and cultural modernization.
AUTHOR BIOGRAPHY
Jose Eduardo Gonzalez is associate professor of Spanish at the University of Nebraska. He is the author of Borges and the Politics of Form and coeditor of Primitivism and Identity in Latin America: Essays on Art, Literature and Culture, and New Trends in Contemporary Latin American Narrative: Post-National Literatures and the Canon.
TABLE OF CONTENTS
Contents
Introduction
1. Debates, Dreams, and Fears
2. Nature and Interior
3. Origins of Transculturation
4. Mediations
5. Technique and Technology
6. The Burden of Exile
7. Misunderstanding Foucault
Conclusion
Notes
Works Cited
Index
REQUEST ACCESSIBLE FILE