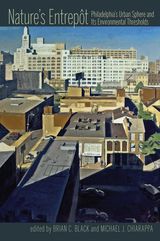 In Nature’s Entrepôt, the contributors view the planning, expansion, and sustainability of the urban environment of Philadelphia from its inception to the present. The chapters explore the history of the city, its natural resources, and the early naturalists who would influence future environmental policy. They then follow Philadelphia’s growing struggles with disease, sanitation, pollution, sewerage, transportation, population growth and decline, and other byproducts of urban expansion. Later chapters examine efforts in the modern era to preserve animal populations, self-sustaining food supplies, functional landscapes and urban planning, and environmental activism.

Philadelphia’s place as an early seat of government and major American metropolis has been well documented by leading historians. Now, Nature’s Entrepôt looks particularly to the human impact on this unique urban environment, examining its long history of industrial and infrastructure development, policy changes, environmental consciousness, and sustainability efforts that would come to influence not just this region but also the nation.
AUTHOR BIOGRAPHY
Brian C. Black is professor of history and environmental studies at Pennsylvania State University, Altoona. He is the author of several previous books, including Petrolia: The Landscape of America’s First Oil Boom and Crude Reality: Petroleum in World History.
Michael J. Chiarappa is associate professor of history at Quinnipiac University. He is coauthor of Fish for All: An Oral History of Multiple Claims of Divided Sentiment on Lake Michigan.
REQUEST ACCESSIBLE FILE