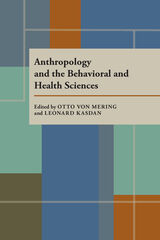 This book acts as a catalyst for anthropology to foster research ties to its neighboring disciplines in the behavioral and health sciences.  It is an introspective and circumspective appraisal of the relevance of anthropology to these related disciplines and professions and assesses the usefulness of reciprocal borrowing of ideas and investigative tools among them.  Essays by scholars from several disciplines are included, along with commentaries on each essay by noted social scientists.