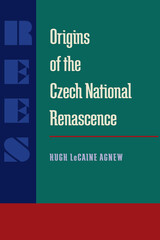 With the fall of socialism in Europe, the former East bloc nations experienced a rebirth of nationalism as they struggled to make the difficult transition to a market-based economy and self-governance.  The dissolution of Czechoslovakia, in particular, underscored the power of ethnic identity and ancestral loyalties.
Hugh Agnew develops the argument that Czechoslovakia's celebrated national revival of the mid-eighteenth century has its intellectual roots in the Enlightenment and defined the nation's character and future development.  He describes how intellectuals in eighteenth-century Bohemia and Moravia--the “patriotic intelligentsia”--used their discovery of pre-seventeenth-century history and literature to revive the antiquated Czech vernacular and cultivate a popular ethnic consciousness.  Agnew also traces the significance of the intellectual influences of the wider Slavic world whereby Czech intellectuals redefined their ethnic and cultural heritage.
Origins of the Czech National Renascence contributes to a renewed interpretation of a crucial period in Czech history.
AUTHOR BIOGRAPHY
Hugh LeCaine Agnew is associate professor of history and international affairs at George Washington University.
REVIEWS
“Admirably fills a gap in the history of Czech nationalism. By focusing on a small group of intellectuals and popularizers, Agnew illustrates the early contours of Czech national ideology and self-image. . . . This well-researched and highly recommended study is certain to stimulate additional research on eighteenth- and early nineteenth-century Czech history.”
—Slavic Review


“There is no book like this, even in the Czech language.”
—Josef Anderle, University of North Carolina