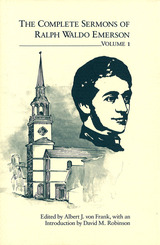 This inaugural volume of a four-volume set marks the beginning of the publication of all 180 of the extant sermons composed and delivered by Emerson between the start of his ministerial career in 1826 and his final retirement from the pulpit in 1838.

Edited from manuscripts in the Houghton Library, Harvard University, the sermons are presented in chronological order in a clear text approximating as nearly as possible the original version read by Emerson to his congregation.  The historical introduction by David M. Robinson gives a significant appraisal of Emerson's life between 1826 and 1838 and of his absorption in and reaction against the religious culture of his time.

Albert J. von Frank is Associate Professor of English at Washington State University.  He is the author of The Sacred Game:  Provincialism and Frontier Consciousnes in American Literature, 1630-1860 and the coeditor of The Poetry Notebooks of Ralph Waldo Emerson.