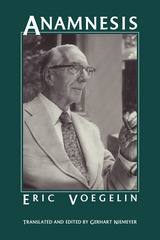 Anamnesis: On the Theory of History and Politics
by Eric Voegelin
translated by Gerhart Niemeyer
University of Missouri Press, 1990
Paper: 978-0-8262-0737-1
Originally published in German in 1966, Anamnesis was first available in English in 1978. The translated version includes Voegelin's "Reason: The Classic Experience," as well as a new first chapter that was written by Voegelin especially for this translation.

Anamnesis pulls together those materials that focus most sharply upon the development of Eric Voegelin's philosophy of consciousness. Voegelin is considered one of the most influential and profound philosophers of our time and has had an enormous impact on contemporary intellectual life.
AUTHOR BIOGRAPHY
About the Author
Eric Voegelin (1901-1985) was one of the most original and influential philosophers of our time. Born in Cologne, Germany, he studied at the University of Vienna, where he became a professor of political science in the Faculty of Law. In 1938, he and his wife, fleeing Hitler, immigrated to the United States. They became American citizens in 1944. Voegelin spent much of his career at Louisiana State University, the University of Munich, and the Hoover Institution at Stanford University. During his lifetime he published many books and more than one hundred articles.

About the Translator
Gerhart Niemeyer (1907-1997) was Professor of Government at the University of Notre Dame. He wrote several books, including Aftersight and Foresight: Selected Essays, Between Nothingness and Paradise, and Law without Force.

REVIEWS
"The idea of reissuing Gerhart Niemeyer's edition of Voeglin's Anamnesis as a paperback is a winner all the way. . . . The German version is not available; and Niemeyer's translation is out of print and much in demand, since it contains some of the most important things Eric Voegelin ever wrote."—Ellis Sandoz, Director of the Eric Voegelin Institute for American Renaissance Studies


"Anamnesis is the work of Voegelin to which any student of his thought must return again and again."—Paul Caringella, Hoover Institution on War, Revolution and Peace