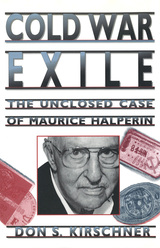 In 1953 Maurice Halperin was called before the Senate Internal Security Subcommittee to defend himself on charges of espionage. He was accused of having supplied Soviet sources with classified material from the Office of Strategic Services while he was an employee during World War II.

The Cold War was in full force. McCarthyism was at its peak. Caught up in the rapids of history, Maurice Halperin's life spun out of control. Denying the charges but knowing he could never fully clear his name, Halperin fled to Mexico and then, to avoid extradition, to Moscow. Among the friends he made there were British spy Donald MacLean and Cuban revolutionary leader Che Guevara. Disenchanted with socialism in the Soviet Union, he accepted Guevara's invitation to come to Havana in 1962. There he worked for Castro's government for five years before political tension forced him to leave for Vancouver, Canada, where he now resides.

Was Halperin a spy or a scapegoat? Was he a victim of Red- baiting or a onetime Communist espionage agent who eventually lost faith in Communism? Halperin's accuser was Elizabeth Bentley, a confessed Soviet courier who accused more than one hundred Americans of spying. Yet Bentley had no proof, and Halperin continues to maintain his innocence. One of them was lying. As Kirschner unravels the engrossing facts of the case--utilizing FBI files and dozens of interviews, including extensive interviews with Halperin himself--the reader becomes the investigator in a riveting real-life spy mystery. Along the way Kirschner offers new material on the OSS and further disturbing information about J. Edgar Hoover's use of his considerable power.

Maurice Halperin has lived a life like few Americans in our century. A left-wing American exile, he experienced two socialist worlds from the inside. In recounting the unclosed case of Maurice Halperin, Cold War Exile is both a gripping account of that remarkable life and a significant contribution to our understanding of a fascinating and controversial era in American political history.

Don S. Kirschner is the author of The Paradox of Professionalism and City and Country. He is Professor of History at Simon Fraser University in British Columbia.