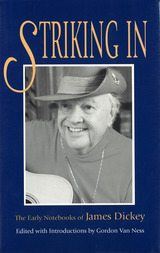 Striking In provides the first detailed look at the artistic beginnings of one of America's most accomplished writers. Chronicling James Dickey's close scrutiny of a wide variety of literary, philosophical, and anthropological works, his extensive experimentation with the possibilities of language, and his projected outlines for poems, stories, and novels, the notebooks serve as a critical tool in understanding Dickey's literary apprenticeship during the fifties.

Although the notebooks identify the influence of writers such as George Barker, Hart Crane, and Dylan Thomas, they primarily present a man endeavoring to chart his own artistic course or destination. The entries depict the process by which Dickey developed the ideas and images that characterize what he himself has labeled his "early motion," revealing the origin of Into the Stone, Drowning with Others, and Helmets, his first three published books of poetry, and suggesting the material and techniques of later volumes.

The introductions by Gordon Van Ness place each notebook in a biographical context and assess its individual significance, and an appendix lists all of Dickey's poems published in the fifties. Extensive footnotes provide further information on many of the specific references within Dickey's entries. Of special importance is the inclusion of ten never-before-published poems as well as fourteen others never collected in Dickey's books.

These notebooks show a young man obsessively committed to improving his creative and critical practice. By providing a direct glimpse into Dickey's mind before he achieved notoriety, Striking In sheds important new light on Dickey's struggle to discover a style and subject matter uniquely his own and will be essential reading for anyone interested in the complexities of Dickey's literary career.

Gordon Van Ness is Associate Professor of English at Longwood College in Virginia. He is the author of Outbelieving Existence: The Measured Motion of James Dickey.