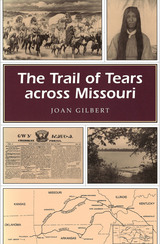 As settlers moved beyond the eastern seaboard during the early nineteenth century, the government forced thousands of American Indians from their ancestral lands. The Cherokees, the largest and most important tribe in the Southeast, fought exile with a combination of passive resistance and national publicity for their plight. Because they had successfully resisted the government's efforts to move them from their homeland, their removal was particularly brutal when it finally came. The Trail of Tears across Missouri is a moving account of the 1837-1838 removal of the Cherokees from the southeastern United States to Indian Territory (now Oklahoma).

After providing an overview of the Cherokees' life in the Southeast and of the events leading up to their exile, Joan Gilbert traces the mass exodus state by state from Tennessee to Arkansas. Successive chapters highlight the experiences and the hardships endured by those forced to travel with inadequate supplies of food, clothing, and transportation. It is estimated that four thousand Cherokees, nearly a quarter of the tribe, died.

In bringing the grim realities of the forced march to life, Gilbert draws from such primary sources as letters, newspaper stories, and the writings of missionaries, guides, and doctors who accompanied them. She focuses on the Cherokees' experiences as they passed through Missouri, using the journals of Dr. W. I. I. Morrow and guide B. B. Cannon.

In addition to chronicling the removal of the Cherokees, Gilbert also brings the story up to date by describing how the nation lives today and how the Trail of Tears has been commemorated.

A resident of Hallsville, Missouri, Joan Gilbert is the author of two novels and more than six hundred articles, twenty for which she received first-place literary awards.