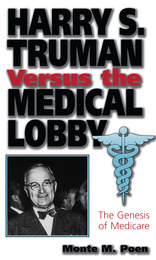 “I have some bitter disappointments as President,” reflected Harry Truman after leaving office, “but the one that has troubled me the most in a personal way, has been the failure to defeat organized opposition to a national compulsory health-insurance program.”

Harry S. Truman versus the Medical Lobby by Monte M. Poen examines proposals for national health insurance from 1914 to 1965 focusing on Truman’s efforts during his presidency.
AUTHOR BIOGRAPHY

Monte M. Poen is Regents' Professor of American History at Northern Arizona University in Flagstaff. He is the editor of several books, including Strictly Personal and Confidential: The Letters Harry Truman Never Mailed and Letters Home by Harry Truman (both by the University of Missouri Press).

"This volume challenges those who are labeled 'New Left' historians because of their attacks on Truman's domestic conservatism, by maintaining that his proposals in the area of national health care were far ahead of their time and were, indeed, actually 'radical.'. . . This well-written book fills a void in the historiography of the Truman administration, for no other monograph has addressed itself to this timely subject."--Choice


"An examination of Harry Truman's efforts to obtain a national health insurance program and the factors behind his inability to do so. . . . Well researched and well written. . . . A valuable contribution to the history of the Truman Administration as well as to the history of public health."--American History Review


"This book is an interesting account of a crucial period in the long and winding road to comprehensive health care in the United States. It details the legislative victories and defeats and the political forces involved during the Truman years. . . . This book should interest those concerned with the current health care debates."--Social Work