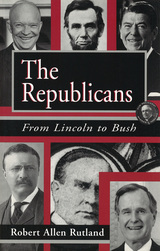 The Republican party has always been fascinating to those who subscribe to its principles, as well as to those who take an alternative stand on the issues. In The Republicans: From Lincoln to Bush, Robert Allen Rutland has brought a clear and concise understanding of this political party to the general reader. The book is a lucid and fast-paced overview of the Republican party from its beginnings in the 1850s through the 1994 congressional elections, which saw the Democratic domination of the House and Senate come to an abrupt end.

In a crisp, highly readable style, Rutland begins by explaining how the "obnoxious" Kansas-Nebraska Act of 1854 overturned the Missouri Compromise, inflamed the North, and caused the collapse of the Whig and American parties. The result was the birth of the Republican party, whose purpose was to oppose the Democrats and stop the spread of slavery. Abraham Lincoln was elected the first Republican president in 1860.

The Republicans suggests that a major shift in voting strength took place twice during the twentieth century, first in the New Deal years, and again after 1968 when the GOP made an appeal to southern voters and finally took control of the area that had previously been dominated by the Democrats. With the 1980 election of Ronald Reagan as the fortieth president of the United States, the Republicans gained support from many first-time voters, middle-class whites, and labor unions-- groups not previously expected to vote Republican. In the companion volume, The Democrats: From Jefferson to Clinton, Rutland provides an honest and straightforward assessment of the strengths and weaknesses of Democratic presidents. Here he presents an evenhanded look at the good and not-so-good Republicans. By skillfully using stories and anecdotes from various administrations to enliven this narrative of political history, Rutland gives Republicans and Democrats alike a deeper appreciation for the two-party system.

Robert Allen Rutland is Research Professor of History at the University of Tulsa. He is also the author of numerous books, including The Democrats: From Jefferson to Clinton, The Republicans: From Lincoln to Bush, and James Madison: The Founding Father (all with the University of Missouri Press).